Firstly, irrespective of what external or internal martial art that you practice, the power has to start in the feet, travel through the whole body and be released out through the hands and fingers. The whole body has to be coordinated with good body mechanics (Shen Fa) and correct body alignments to issue power (Fa Jing) into your defensive and offensive fighting techniques.

In the study and practice of the Li Style (Lishi) Feng Shou-Kung Fu the practitioner learns firstly how to develop and use the “External Six Harmonies Method” (Wai Liu He Fa) to issue power into their fighting techniques, immediately within their very first class training session. This is done by teaching them to move the whole body as a unit by using the various linear defensive and offensive ladder stepping (Ti Bu Fa) Methods that allows the practitioner to be constantly on the move. The next stage is to then learn how to combine the shoulders (Jian) and hips (Kua) together to allow the power and strength that begins in the feet to travel through the body, shoulders and hips into the arms and hands without losing any power.

The key is to realise that the opposite shoulder and hip must be linked and connected together. The right shoulder is connected to the left hip and vice- versa on the opposite side of the body. If the practitioner is standing in a left trinity stance (Santishi) or a Snake Stance (She Shi), if the practitioner does a short ladder step forwards to strike with their left hand, then the left shoulder is pushed forwards, but the right hip must sink and fold backwards. So that the torso rotates around their taiji pole to allow the rising power to be lead and guided to issue power into the their left hand.

Likewise, if the practitioner uses a short defensive ladder step with a left inwards arm/ hand deflection, then the left shoulder is pushed forwards, but the right hip must fold and sink backwards, allowing the body to rotate around its taiji pole to lead the rising strength from the legs to be guided by the hips and shoulders to issue power and strength into their left ward off arm/hand method. Learning to develop good body mechanics (Shen Fa) in harmonising your shoulders and hips to work together, while being constantly on the move can generate a tremendous amount of obvious power (Ming Jing) into a beginner practitioners fighting techniques, for the more experienced practitioner they must learn to develop their hidden power (An Jing) by refining their body mechanics over many hours of dedicated practice time.

Refining the ability to issue hidden power (An Jing) into your defensive and offensive fighting techniques. Again comes down to the timing of good body mechanics (Shen Fa) which can only be developed through regular self practice by every practitioner. Because the practitioner has developed a high level of timing in their ability to coordinate the whole bodies legs, hips, waist, spine, shoulders and arms together, and to maintain a more relaxed, loose body (Song). They are more able to issue power and strength into their techniques from a much closer distance without telegraphing their intention by using large obvious actions that an opponent can see coming. Hence they have developed what we call “Hidden Power” (An Jing) which can only be developed and attained through good body methods (Shen Fa). 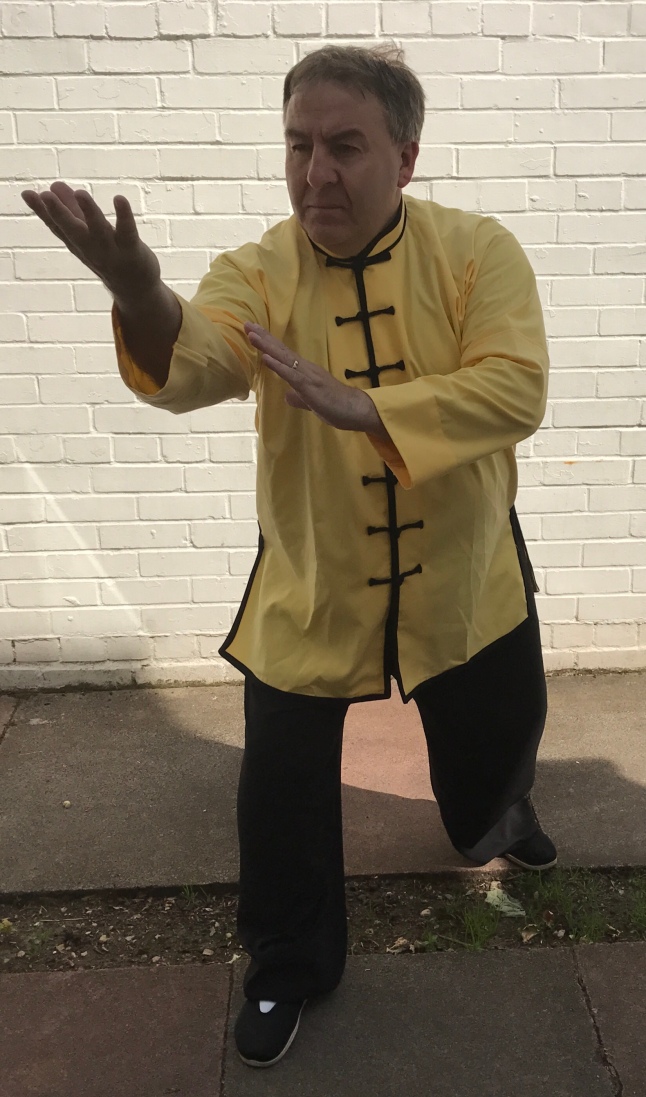 The Turn the waist & Push the palm taiji qigong is part of the first set of eighteen exercise of the standardised taiji qigong exercises. This particular exercise is beneficial for suffers of back, spine and hip problems, like muscular tension accumulated within the shoulders and back muscles, stiffness within the spinal column and hip joints. Which can affect the circulation of blood, lymph and Qi to stagnate within certain areas of the body, lowering the strength of the immune system which can then weaken each individuals health and wellbeing.

As this exercise is performed on both sides of the body with the bodyweight being fully placed onto one leg at a time. The muscles, tendons and bones within the lower extremities develop strength to help maintain or improve the mobility of every individual, irrespective of their age. As the legs get stronger from regular practice the ability to maintain balance also improves, plus the cardio fitness and stamina levels also improve or are maintained.

Irrespective of what taiji qigong exercise the individual decides to practice. Wether it be just a single exercise, or just one or two or even the whole eighteen exercises. The key element is that each exercise is performed as slowly as possible, making sure to allow your breathing to dictate the over-al speed of your actions. This then places a great amount of skill development on being able to breath long, slow, deep and even, inhaling and exhaling through the nose, allowing for the tongue to touch the roof of the mouth to connect both the Governor meridian (Du Mai) and the Conception Meridian (Ren Mai) to join together.

Obviously, a great amount of concentration as to be taken on by each individual to coordinate the breathing with their movements. Making sure not to suddenly speed up or pause and hesitate. The turn the waist and push the palm taiji qigong exercise is quite complicated, as there are many actions that have to be all timed smoothly together to allow the mind, breath and actions to guide & lead the Qi through the entire body to remove blockages that may have accumulated over time, due to injury, illness, lack of exercise etc. 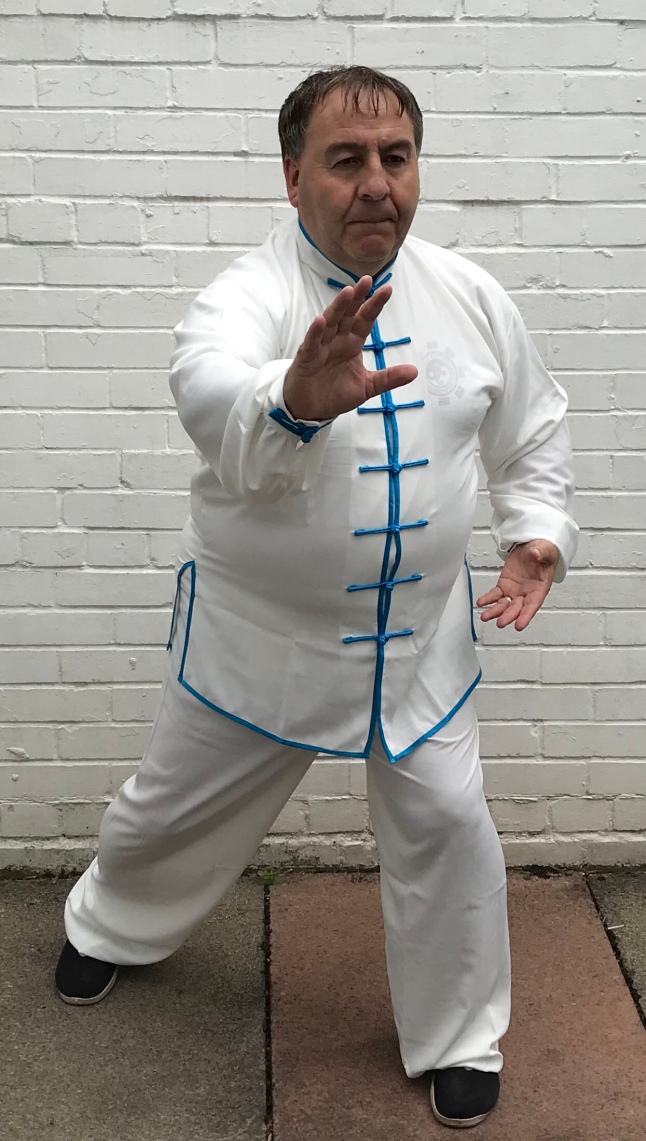